Im new to the Velbus system so i’m in the process of learning.
Bumped into my first “issue”, im 100% sure there is a workaround but i have not ventured out far enough.

Got a button witch Switches off the relay, Atmospheric dim value’s to 50% = EASY
This is where i am stuck.

At first i had the issues the relay and the dimmer would get out of SYNC because of using toggle.
Fix this with keeping toggle on the relay, but follow on the dimmer. So far so good.

Now the issue, the misses wants the “TV mode” Button to be able to switch off Relay, go to 50% BUT the single touch to also just switch them off.
In short 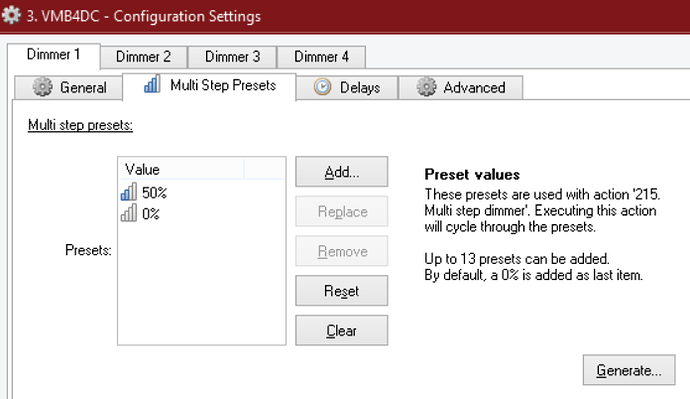 Perfect ! Thanks ! This will do

Heya, Played around with it. This seems perfect. Only downside is

Lets say 4 zones are switched on.
I make a button switch off zone 1 2 3 and zone 4 wich is the dimmer zone i use the multi step dimmer

This is okay, but the initial push will always switch the dimmer to the 0% as the first step. But i would like it to go to 25% like it is configured.
How can i prevent this ?

Multistep will only work as a toggle if it has only 2 steps (as in my screenshot above). You have a lot more steps and the dimmer will simply go to the next in the list, that won’t act as a toggle function.

Yep, you are right, however with only 2 steps i have the same behavior.
Lets say, i use the button TV, i switch off the leds(backline) and we go to 50%(front line dimmer), TV mode, Great !
Afterwards we use the button Living on; switches on the LED(backline) and brings the dimmer up to 100%.(frontline)

Next time we use the TV button again it will turn off all lights as expected, but it will bring the dimmer to 0%. Wich in a way is completely normal as it is the next step.
How can i prevent this behavior ?

The easy way is two separate buttons, one “on”, the other “off”. Or the same button in dual mode (short press “on”, long press “off”. Then you don’t even need multistep, just the actions “on” for the relays and “Atmospheric dimvalue 50%” (214) for the dimmer.

The somewhat more complicated way is “sensing” in which state the outputs are, and accordingly carry out the right action. See below for the general principle.

Then you could use the state of other devices to determine the scenes to set.

I think what you’re learning towards is Automation with Logic, rather than mere Control.